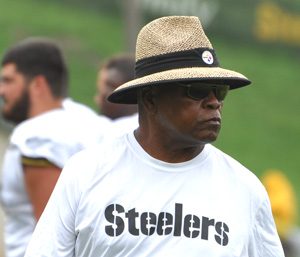 NFL security is investigating Pittsburgh Steelers tight ends coach James Daniel for allegedly assaulting and verbally accosting a New England Patriots fan on the way to the locker room before halftime, according to league sources.

A league official confirmed the NFL is aware of the incident and is looking into it. A Steelers spokesman said NFL security has informed them about the incident and the team is also investigating.

The incident in question occurred before and after halftime. Daniel, who was on his way to the Steelers’ locker room, was seen allegedly kicking a Patriots fan in the back of his leg and yelling at the fan in front of witnesses.

By the time Daniel returned to the coaching booth after halftime, police and NFL security were waiting for him. Once the coach was identified by witnesses, and police approached him about controlling his behavior, Daniel began shouting at the police officer, according to witnesses.