Today the wife of Washington Redskins general manager Scot McCloughan posted a tweet towards Dianna Russini that has went viral. 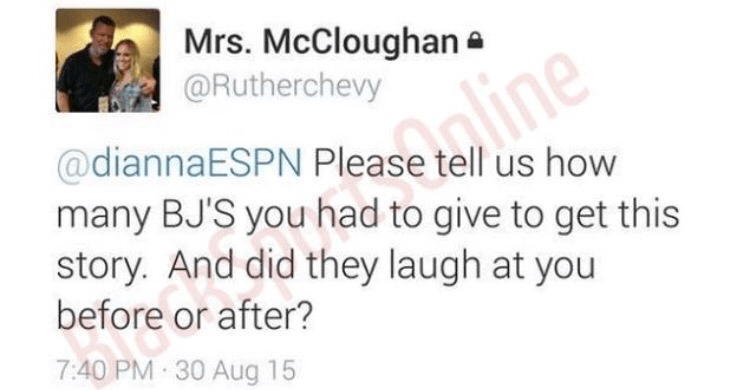 Jessica McCloughan apparently took exception to a report from Russini, which said there were disagreements within the organization about whether or not to move on from quarterback Robert Griffin III.
Jessica quickly deleted the tweet, and then this statement was issued.

“I deeply apologize for the disparaging remarks about an ESPN reporter on my personal Twitter account,” the statement obtained by ProFootball Talk read. “The comment was unfounded and inappropriate, and I have the utmost respect for both the reporter and ESPN. I regret that my actions have brought undeserved negative attention to the (Washington) organization and its leadership. My comments in no way reflect the opinions or attitudes of the organization and I regret that my behavior has in any way negatively impacted the team and its loyal fan base.”