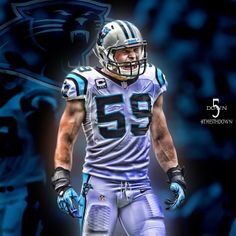 The Panthers have agreed to a five-year, $62 million contract extension with linebacker Luke Kuechly, according to NFL Network. His extension averages $12.4 million per year, which makes him the highest paid inside linebacker in NFL history.

The 2012 first-round pick (ninth) was the AP Defensive Rookie of the Year and 2013 AP Defensive Player of the Year. He went to Pro Bowls in 2013 and 2014, while also being a first-team All-Pro player both years.