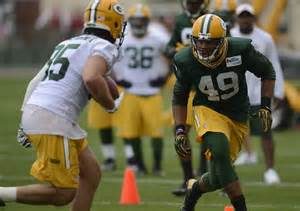 Today the Green Bay Packers have released linebacker Adrian Hubbard. Hubbard was on the Packers’ practice squad the entire 2014 season. The Packers signed Hubbard as an undrafted free agent out of the University of Alabama.

As a redshirt sophomore in 2012, Hubbard had seven sacks, including one in the 2013 BCS National Championship Game. He led Alabama in sacks (7), tackles for loss (11) and forced fumbles (3). Hubbard recorded a sack in each of Alabama’s last three games (Auburn, Georgia and Notre Dame). His 7.0 sacks ranked sixth in the SEC this season. After his junior season in 2013, he entered the 2014 NFL Draft.