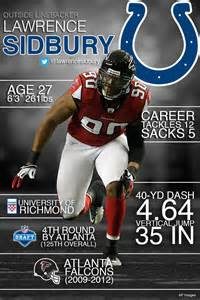 Both Sidbury and Massaquoi were on the Falcons roster recently.