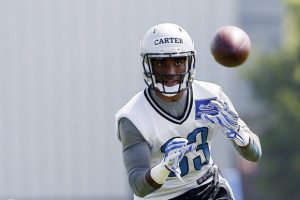 Detroit Lions rookie cornerback Alex Carter was the 80th pick of the 2015 draft, but he’ll have to wait a while to make his regular season debut.

Carter hurt his ankle early in training camp and the team placed him on injured reserve with the designation to return on Sunday as a result.

With Carter headed to IR, the Lions were able to bring back a player they cut on Saturday. Defensive tackle Jermelle Cudjo was brought back to the roster after a preseason that saw him record a pair of sacks up front for Detroit.