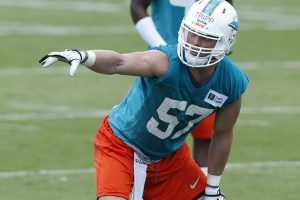 Jordan Tripp has signed with the Jaguars practice squad

Tripp was drafted by the Dolphins in the fifth round of the 2014 NFL Draft. Prior to the start of the 2013 season, Tripp was named the Big Sky Conference Preseason Defensive MVP. He started all 13 games, recording a career high 100 tackles, including 5.5 for loss, two sacks, and three interceptions. He recovered three fumbles, one in the endzone against Portland State for a touchdown. He also blocked a field goal late in Montana’s 21-14 overtime victory over Cal Poly. After the season, Tripp was named a first-team All-Big Sky selection for the second consecutive season, and was named a first-team FCS All-American by the Associated Press.