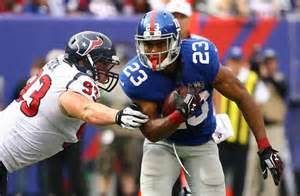 Rashad Jennings of the Giants tossed his quarterback under the bus this past week, and now he is apologizing for doing so.

“First of all, let me say that I want to apologize from my heart for the negative light that I unintentionally cast my quarterback and friend Eli Manning in,” Jennings said. “I continue to have the utmost respect for him, and I have complete trust in his leadership. It is a strange and unwelcome feeling I have that after all these years as a professional football player, I finally get to experience the other side of how words can be misconstrued.”

Jennings should be more careful the way he says things.

“As soon as I got word of the headlines, I called Eli, and before I could even begin to apologize, he basically expressed his understanding,” Jennings said.. “Being the humble guy that he is, he wanted us to put this fiasco behind us with no hard feelings so that we could focus on the Falcons.”