Former Dolphins CB takes a shot at Joe Philbin; Calls out the players too 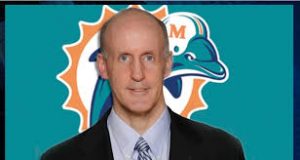 Dolphins head coach Joe Philbin knows he is on the hot seat in 2015, but he is not a vocal guy….

Right now the Miami Dolphins are flat lining and they shouldn’t be.  They spent more money than any team in free agency and landed the best defensive player available.  They are not looking like that team though right now, and a former Dolphins player called out the head coach Joe Philbin and the Dolphins players.

According to Adam Beasley of the Miami Herald, former Dolphins cornerback Patrick Surtain feels that the Dolphins need players to step up and take control of the situation, because their coach is not that type of guy.

“They’re taking on the personality of the head coach right now,” Surtain said. “Something has to change. It has to come from a player in the locker room.”

Asked if Philbin was the right coach for the Dolphins, he replied: ““I don’t know if there is a message. What’s the message? He’s not that vocal guy like a Jim Harbaugh or a guy like that. . . .

“Jimmy [Johnson] had us on pins and needles. You had to perform or you were out the door.”