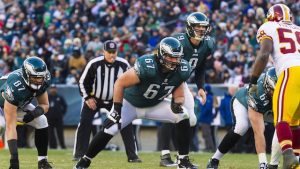 Dennis Kelly of the Eagles has been given a pay raise

Field Yates of ESPN reports that the Eagles have signed backup OL Dennis Kelly to a one-year contract extension on Wednesday. According to Yates, Kelly’s extension will pay him a $760,000 base salary to go along with a $30,000 workout bonus.