Do the Raiders know more than we do about the Aldon Smith case? 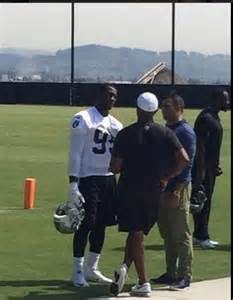 Do Raiders know something we don’t about Aldon Smith’s case?

Almost every player in the NFL that gets in trouble is suspended before the start of the season, but one player that has not been suspended. Aldon Smith was arrested on August 7th after his fifth legal run-in since being drafted by the 49ers in 2011. Smith was arrested in Santa Clara on charges of drunken driving, hit and run and vandalism. The Santa Clara District Attorney’s office said that Smith was charged Friday with three misdemeanors relating to his latest arrest and will be arraigned on Oct. 6.

Jack Del Rio said he was very thorough in his pursuit of Smith, but did the Raiders do really, really good homework?

”We’re very thorough on what we do and how we do it,” coach Jack Del Rio said. ”We feel very confident about the addition and about our football team going forward.”

If Aldon Smith pleads guilty to a lesser charge, he may be facing a 2 game suspension, but if he appeals it it could last the entire season.  This makes me wonder if that is why the Raiders picked him up. What do you think?

I would not be surprised to see Aldon Smith on the field come Sunday against the Bengals.