Cowboys Should Trade for RG3

The Dallas Cowboys defeated the New Giants 20-10, making the team 2-0 to start the season. The victory didn’t come without a steep price, however. 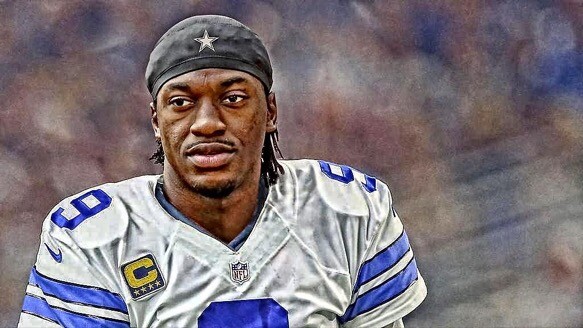 Star quarterback Tony Romo suffered a fractured left clavicle, without doubt placing him on the shelf for at least a big chunk of the regular season. No timetable has been set for his return, but the same injury ended Romo’s campaign back in 2011.

If the Cowboys determine that Romo will be forced to miss a significant portion of the season, the fate of this year’s team will rest largely on the shoulders of Brandon Weeden. That’s got to be a scary proposition for Cowboy fans, to say the least.

No Demarco Murray. No Dez. No Romo. That is a big problem. The Cowboys play ball in the Big D, and they need an even bigger solution for the Cowboys to remain Super Bowl (or even playoff) contenders.

RG3 dominated the NFL in his first season, actually outplaying fellow 2012 rookies Andrew Luck and Russell Wilson. Obviously he has had some serious injuries, been the subject of constant off-field drama, and his play has dropped off in the last two seasons.

But let’s be honest here: there is still a lot of talent and potential with RG3. He just hasn’t made good on it by taking the next step in his development like many expected him to. There are a million reasons for that, some his fault, some others, some just plain bad luck.

Even with his fall from grace, you’d have to be ridiculously stupid to think Griffin isn’t still a kazillion (yes, the difference is so big it requires a new number) times better than Brandon “Duck Thrower” Weeden.

Bleacher Report’s Matt Miller acknowledged how much better Griffin is than Weeden in his “NFL 1000” series in which he ranks players at every position based on their performance from the previous season only. Miller ranked Weeden dead last at 50 out of the 50 signal callers he scouted. RG3 came in at 22.

If Dallas wants any shot at getting to the playoffs, they need at least some sort of quarterback competency until Romo returns.

Weeden can’t provide that at all. Griffin can do that, and more.

Give RG3 that offensive line. Don’t ask him to do too much. Pound the rock with a backfield-by-comittee approach and steady use of the read-option. Utilize a lot of play action and short, simple passing concepts. After a few games, add in some new wrinkles.

We talked about why the Cowboys need to trade for a quarterback, why it should be RG3, and how they could go about using him; now let’s talk about what it’d take to bring him to Dallas.

The Redskins are playing good at 1-1. They should be 2-0, but let Miami steal one in the opener. It’s obvious a change of scenery for Griffin would be best for all parties at this point.

With RG3 sitting third on the depth chart, it’s clear how the team values him. It likely wouldn’t take too much to pry him away. A third round pick (plus a late rounder if necessary) should definitely be enough to get a deal done.

At the very least RG3 can keep the win-now Cowboys in the hunt for a ring. However, Griffin could potentially really thrive and be Romo’s long term successor.