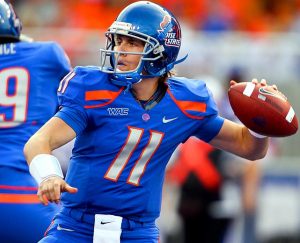 Today the Dallas Cowboys promoted Kellen Moore off the practice squad.  Moore will likely compete as the back-up position this week since he understands the terminology. The Cowboys traded for Matt Cassel yesterday and he will push Brandon Weeden for the starting position.

According to NFL.com’s Ian Rapoport, the Cowboys are bringing up Moore from their practice squad instead of signing a free agent. The addition of Moore to the active roster comes shortly after the team officially announced that starting quarterback Tony Romo was placed on the injured reserve/designated to return list after suffering a broken collarbone during Sunday’s win against the Philadelphia Eagles.  The team also signed defensive end Efe Obada to the practice squad taking Kellen Moore’s roster spot.