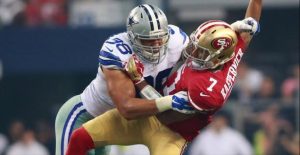 Cowboys DT Tyrone Crawford announced via his Twitter account Saturday that he has signed a new extension that will keep him in Dallas for the next five years.

Crawford posted this tweet, after signing the deal with the Boys.

Hard #WorkK pays off! Blessed to be part of the @DallasCowboys for the next 5 years! https://t.co/wV4CS8W8A2pic.twitter.com/JeIesxXtKQ

The #Cowboys and DL Tyrone Crawford have agreed to terms on a 5-year, $45M extension, source said. Huge for an ascending player