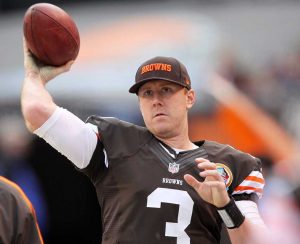 Brandon Weeden has the trust of the Cowboys coaches, but what about the fans?

When is the last time trusted 1000 percent and Brandon Weeden were in the same sentence?

Well that is what Cowboys head coach Jason Garrett told his starting quarterback after the Cowboys traded for Bills back-up Matt Cassel.  Garrett assured Weeden that he was the starting guy, and to say you trust in him 1000 percent is a pretty steep statement.  I hope the Cowboys are ready this week, because Brandon Weeden was not the greatest quarterback since entering the NFL.

Brandon Weeden said Jason Garrett called him Tuesday afternoon when Cowboys were trading for QB Matt Cassel. Told him he trusts him 1,000%