Could the Cowboys see Matt Cassel sooner rather than later? 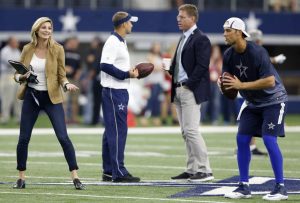 Last week the Dallas Cowboys traded a draft pick to the Buffalo Bills to acquire veteran quarterback Matt Cassel. Today Jason Garrett pumped him up, saying he is working hard and learning the terminology and by the sounds of it we could be seeing Cassel sooner rather than later.

“He’s working hard at it,” Garrett said Monday of Cassel. “He’s a smart guy. He’s an experienced guy. It comes to him quickly.”

“You ask him to call plays, ‘Give me a play-call. What’s the adjustment?’ Garrett said. “Like you’re a teacher. You’re constantly asking him questions and you’re trying to put him in situations as best you can to see what he knows. He did a lot of work with the two-minute stuff with the coaches last week during the defensive period. He can speak the language. He’s getting more and more comfortable saying it. He’s run a lot of these plays. He knows these concepts. As much as anything else, it’s learning the terminology and learning the nuances of the system.”

Cassel could be active Sunday for the Cowboys’ game at New Orleans and backup Weeden. Just by Garrett quizzing him, it makes me wonder if their connection to Norv Turner could help him get the nod over Brandon Weeden.