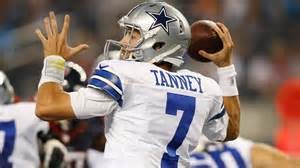 He was the starting quarterback for the Monmouth College Fighting Scots. While Tanney was in college at Monmouth, he made a football trick shot video that went viral. On October 29, 2011, in a game against Carroll University, Tanney set the NCAA record for all-time career touchdown passes.

Since entering the NFL in 2012, Tanney has bounced around the NFL several times. He was recently signed by the Bills.