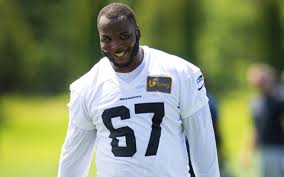 Today the Kansas City Chiefs were busy.  The team announced via Twitter that they signed DT Jimmy Staten to their practice squad on Wednesday to replace DL David Irving, who signed to the Cowboy’ active roster. The team also placed CB Phillip Gaines on the injured reserve.

Gaines went down early in the first quarter of Monday night’s eventual loss to the Packers with a non-contact injury.

Staten was drafted by the Seattle Seahawks and spent time on their roster before getting released.