Chiefs get CB Sean Smith back from suspension today 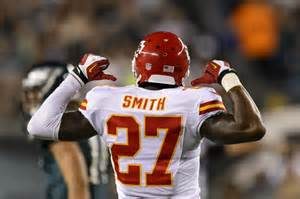 Chiefs will get back starting cornerback Sean Smith this week

Chiefs fans can smile a little this week. Today starting cornerback Sean Smith was activated by the team from his three game suspension. He was drafted by the Miami Dolphins in the second round of the 2009 NFL Draft. He played college football at Utah.

The Chiefs this week get cornerback Sean Smith back from his three-game NFL suspension. The plan is for him to immediately take his place in the starting lineup for Sunday’s game at Cincinnati.

Smith was suspended for the first three games of the 2015 season on July 24, 2015 after pleading guilty to a DUI charge earlier in April.