Can the Redskins afford to pay RG3 16 million to be a back-up? 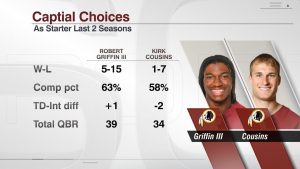 Kirk Cousins is not the best quarterback out there, but he is 1-7 as a starter

Yesterday, the Washington Redskins named Kirk Cousins the starting quarterback.  Cousins was a third round selection, and is getting paid way less money that Robert Griffin III.

The crazy thing is even if the team cuts RG3 they have to still pay him the 16,155,000 dollars this season. If they cut him it is dead cap space, but will still come off the books, which they may not be willing to let him go because of that. They made a decision to pay him and now it seems like they are regretting it.

By sometime this season, RG3 will suit up as the starter, unless something changes dramatically Kirk Cousins will not have a good run. Cousins is 1-7 as a starter and while RG3 is 5-15 and not much better, the team did go to the playoffs under RG3 in his rookie year.

That was before the injury problems. Hopefully RG3 will be able to get it back together, but at the end of the day, Cousins is a cheap option.  I would say the Redskins are in rebuilding mode right now, until they show me they can compete in a deep NFC East division.

Here is my question, If you were GM would you pay RG3 to sit the bench?  No matter what you do cut or bench him he will get paid the 16 million.  I think the Redskins made another poor financial decision, do you agree?