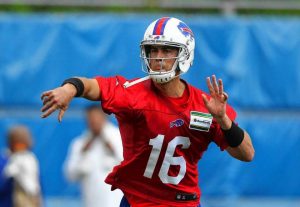 Matt Cassel has been released by the Buffalo Bills

The Buffalo Bills have released veteran quarterback Matt Cassel today. The team has just save 4,750,000 million dollars by doing so. The team has said it was a priority to get defensive tackle Marcell Dareus a long term deal, and with the recent cuts of both Fred Jackson and Matt Cassel, the Bills will have more than enough money to get their young D-Tackle under contract.

Cassel came to the Bills last year when the team traded a draft pick to the Minnesota Vikings for him. He was expected to be the starting quarterback, but both Tyrod Taylor who was signed in the off-season as a free agent and former first round draft pick EJ Manuel passed him on the depth chart.