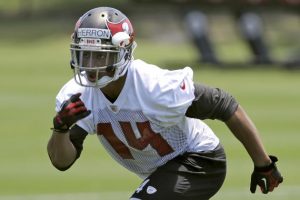 Herron was drafted by the Buccaneers in the sixth round of the 2014 NFL Draft. He played college football at Wyoming.

The Buccaneers announced that they’ve waived/injured second-year WR Robert Herron, CB Leonard Johnson and G Josh Allen as they trimmed their roster down to 75 players.

The Bucs also cut P Michael Koenen, which had been previously reported.

DT Akeem Spence was placed on the PUP list.