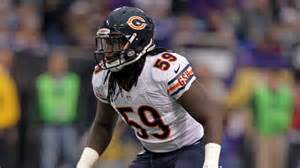 Khaseem Greene has been released by the Tampa Bay Buccaneers

Tomorrow is the deadline for teams to make roster cuts, and the Tampa Bay Buccaneers already got a jump on it.  Today the team informed Khaseem Greene of his release. He was drafted by the Chicago Bears in the fourth round of the 2013 NFL Draft. He played college football at Rutgers.

Greene played for the Rutgers Scarlet Knights football team from 2008 to 2012. As a junior in 2011, he switched from safety to weakside linebacker. He led the Big East Conference with 141 tackles, 3.5 sacks and two forced fumbles. As a senior in 2012, Greene recorded 136 tackles and six sacks with two interceptions, six forced fumbles and two touchdowns via fumble recoveries, and was named the Big East Defensive Player of the Year and a first-team All-American by ESPN. Greene’s 15 career forced fumbles is an NCAA record.

#Buccaneers are waiving LB Khaseem Greene, according to his agent, @andysimms.