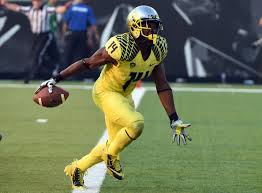 NFL draft expert Mel Kiper, Jr. of ESPN rated Ekpre-Olomu as the top senior cornerback available in the 2015 NFL draft. However, an anterior cruciate ligament injury (ACL) he suffered in December 2014 during practice left many teams no longer interested in him. Ekpre-Olomu later revealed that he had also dislocated his knee. He underwent two major reconstructive surgeries, with his ACL reconstruction being much more extensive than usual. An insurance policy taken out by his family through the NCAA’s exceptional student-athlete disability insurance program paid him $3 million.

Ekpre-Olomu was picked by the Cleveland Browns in the seventh round of the 2015 NFL Draft. He was the 241st player picked overall.