Broncos slowly getting to 75; Release WR Nathan Palmer, two more cuts to be made 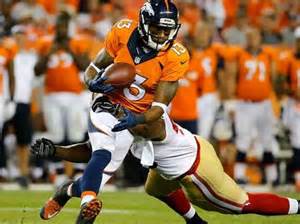 Broncos wide out Nathan Palmer has been released

The Denver Broncos waived wide receiver Nathan Palmer on Tuesday, hours before the NFL’s deadline to cut the roster to 75 players.

Palmer played five games for the Colts in 2012 and was on the Broncos practice squad most of last season.

On Monday, the Broncos reduced their roster by 12 players.

Ten players were released or waived: