Brian Hoyer feels he let the entire Texans organization down 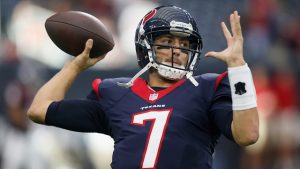 Texans QB Brian Hoyer feels he let his team down

Brian Hoyer was named the Houston Texans starting quarterback last week and in his first start of the 2015 NFL season, Brian Hoyer looked bad.  He was pulled as the starter, and he feels he let the entire organization down.

“That’s coach’s decision, and I can see why he did that,” Hoyer said, via Aaron Wilson of the Houston Chronicle. “It couldn’t have gone any worse, you know what I mean. Obviously, I feel terrible. I feel like I let this whole entire organization down. It just went from bad to worse. I really just couldn’t fight back.

“That’s coach O’Brien’s decision. I respect the hell out of him and whatever he feels is best for the team I think that’s what he will do and we’ll just see where it goes.”

Ryan Mallett could have his number called this week. It is sad that the Texans are struggling considering how good their defense could be.