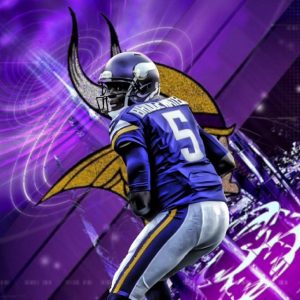 Teddy Bridgewater is aiming for 70 percent this year

Vikings quarterback Teddy Bridgewater will try to do something this season that has been accomplished only five times in NFL history. Bridgewater completed 64.4 percent of his passes last year, the third-highest completion percentage for a rookie in NFL history. But increasing to 70 percent in his second year is extremely unlikely.

The only quarterbacks to have completed at least 70 percent of their passes in a season are Drew Brees, Ken Anderson, Steve Young and Joe Montana. Brees, the New Orleans star who holds the record of 71.2 percent in 2011 and the second-best showing of 70.6 in 2009, has done it twice, but that is Bridgewater’s ultimate goal.

“I think we try to aim to be over 70 percent in the quarterback room,” Bridgewater told the Star-Tribune. “That’s one of our goals. We take pride in completion percentage, we take pride in taking care of the football and commanding the offense. It’s going to be a fun year. I have a ton of weapons at my exposure; and I can’t wait to get everyone going.”