Vernon Adams has been named starting quarterback in Oregon 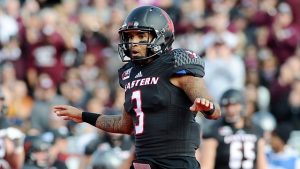 No. 7 Oregon has named transfer Vernon Adams as its starting quarterback for the team’s season opener against Eastern Washington, his former school, on Sept. 5.

Adams was a late arrival to Oregon’s training camp as he finished up his undergraduate requirements, and he beat out junior Jeff Lockie, Marcus Mariota’s backup the past two years, to win the job.

“The separation was enough that as we began today we kind of started our true game week preparations, so the timing worked out for everything,” coach Mark Helfrich said Saturday of making the decision to anoint Adams.