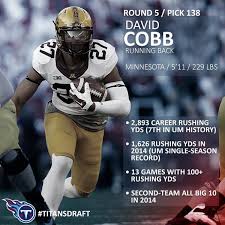 Titans will give David Cobb some first team reps, because they feel he deserved it

David Cobb was banged up all off-season, but in his first preseason game the former Minnesota Gopher running back looked like a beast.  Cobb rushed for 53 yards on 11 carries. His first five runs in the third quarter picked up 8, 8, 7, 6 and 6 yards. While Cobb is not the fastest player on the field, his vision is elite. Cobb has earned first team reps according to his coach Ken Whisenhunt.

“Based on what you saw last night, I certainly think (Cobb) deserves (some first-team work),” Whisenhunt said Saturday. “We’ll work him in. The young man had to get in shape first. That’s been a process because of the quad injury (during the spring). But he did a really nice job last night, and we’ll move him up in the rotation as the weeks progress.”

“He’s got a good feel, good vision, good feet and a good feel for making the cuts and getting through the line,” Whisenhunt said. “That’s what we liked about him at the Senior Bowl. Obviously he was very productive his senior year at Minnesota. We were really excited to get him.

“We were just disappointed that we didn’t get a chance to see much of him in the spring. But he’s worked to get back, and he’ll continue to get more as we progress.”

Cobb was one of my favorite backs in the entire draft leading up to the draft. I love this pick and feel he will tear it up.