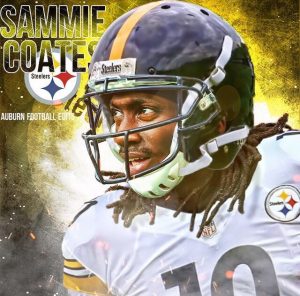 If you are not in shape by now there is a problem right?  Teams have been practicing for three weeks now, and Pittsburgh Steelers head coach was not happy with Sammie Coates the teams third round pick. Sammie Coates had a nice reception on the sidelines, but his coach was not worried about his reception, but more about his conditioning.

“He’s got to get into better condition. Fatigue was a factor like it is with a lot of young guys. He’s got to get better in that regard. I think that the more in shape he gets, in terms of NFL wide receiver shape, the more we’re going to see his skill set like that sideline catch. But until he does, it’s going to be up and down. And that’s not only for him, it’s for all of them.”

Auburn’s Coates was this year’s third-round draft pick. Coates was drafted on May 1. He signed on May 15, agreeing to a four-year deal for $2.91 million, of which $631,500 was guaranteed. It is interesting that the coach called out Coates for his conditioning.  But then again after his comments on Kevin Fogg the other day, maybe it is just tough love….