Sleepers in your Fantasy Football Draft 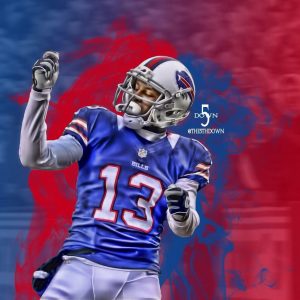 Are you looking for a few sleepers in Fantasy Football this year?  Well we are going to name a few guys you need to keep on your big board, because we feel these guys are due a big year.

I am not saying run out and draft Nick Foles first overall, but later on in the draft, Foles could be a very good steal for someone. Foles is a gun slinger and the Rams have quick wide outs such as Tavon Austin and Stedman Bailey.  Throw in the fact their defense is amazing, they could be a team that puts up quite a bit of points.  They will get good production out of their tight end this year as well, because their quarterback understands how to distribute the ball.

Doug Martin is going to be a steal this year in the draft. Not many people feel he will be a steal but I feel deep down inside, he will be the best running back out there. He is due, and if healthy he will run wild for the Buccaneers.

I am all about my Bills like Stevie Johnson, but this is the best fit for him in a long time. Philip Rivers finally has two decent wide receivers. They are the two best wide out he has had since Vincent Jackson and Malcolm Floyd. Johnson was a one thousand receiver in Buffalo when he was targeted, and Rivers is going to utilize him. Teams will focus on Allen and Stevie will terrorize a number 2 corner.

The Buffalo Bills have not had a tight end since Pete Metzelaars, and that was in the 90’s. I am not saying he is going to be a 1000 yard receiver, but if you need a tight end and it is getting later in the draft, this kid is going to be good. The Bills quarterbacks are suspect which means they will utilize their check downs. Clay will be a check down and he has great hands.

This defense is young, and Mike Pettine has an amazing scheme. They bolstered their defensive line, and they have solid cornerback play. I think this is a steal team of the draft. I drafted them and will use them early and often.  I love this team