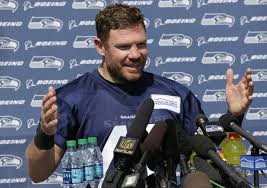 Nate Boyer, the 34-year-old rookie long snapper for the Seattle Seahawks, was let go, according to FOX Sports’ Jay Glazer. The former Green Beret taught himself the craft while overseas and signed with Seattle immediately following the 2015 draft.

Per FOX Sports, he handled the cut better than Seattle Seahawks general manager John Schneider did.

Just talked to Seahawks GM John Schneider, said conversation was hard one to have & Nate ended up consoling them not other way around, haha