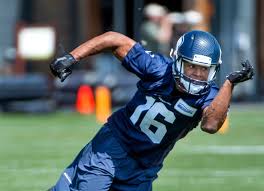 Tyler Lockett was impressive against the Denver Broncos in the first pre-season game, and boy did he draw some very positive things from his coach and quarterback.  Pete Carroll was jumping up and down on the sideline when he was bulled over by the official, but it didn’t matter Carroll was still happy for the third round pick out of Kansas State.

“I thought Lockett’s 83-yard touchdown was pretty good. See, I didn’t see the last 20,” Carroll quipped after the game, per ESPN.com. “But Lock did a great job tonight. He lit it up in kickoff return, punt return. It was great to see that. We all know that’s exactly what we were hoping to see. He looked very special tonight.”

Russell Wilson the starting quarterback was also impressed, and he added that Lockett looked like Jamaican speedster Usain Bolt.

Lockett totaled 186 yards off four kick returns and added another 18 yards off his lone returned punt, leaving Wilson to say that the rookie “looked like (Olympic sprinter) Usain Bolt running down that sideline.”

It looks like Lockett was another draft day steal for the Seahawks.