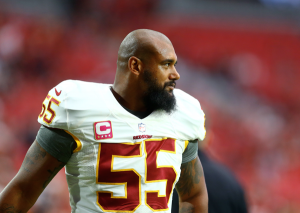 This year has been a bad season for a players knee.  Since the season started a few weeks ago, 19 players have already suffered torn ACL’s according to the ACL Recovery Club on the internet.

Last night Adam Hayward the linebacker for the Redskins suffered a torn ACL which will end his season in 2015. He was drafted by the Tampa Bay Buccaneers in the sixth round of the 2007 NFL Draft. He played college football at Portland State.

Hayward signed a three-year deal with the Washington Redskins. He was placed on injured reserve due to a tibial plateau fracture in his right leg on November 24. He suffered the fracture after jumping to catch the ball during a punt in the Week 12 game against the San Francisco 49ers.