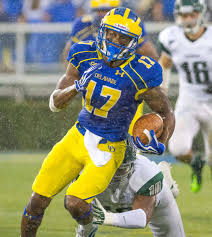 Today the Philadelphia Eagles have signed rookie undrafted free agent Mike Johnson, according to an official release from the team. The addition of Johnson brings Philadelphia’s roster up to the 90-man limit. The team had an open roster spot after trading Brandon Boykin.

Johnson was a four-year starter at the University of Delaware and ranks fifth in school history both in receptions (182) and receiving yards (2,325). Last season, he had 78 receptions for 830 yards and a touchdown. His best season came as a junior in 2013 when he had 60 receptions for 1,035 yards and 9 TDs.