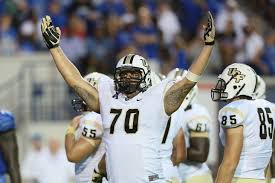 Chris Martin has been claimed by the New England Patriots

Today the New England Patriots claimed offensive guard Chris Martin off the waivers from their arch nemesis.  Martin is a 25 year old guard who played college football for UCF.

Just got word that the New England Patriots claimed Chris Martin off waivers… 2nd year OT/G was released by the Miami Dolphins on Sunday.

Martin, 25, originally signed on with the Texans as an undrafted free agent out of UCF back in May of last year. Unfortunately, Martin lasted just a few weeks in Houston before he was cut loose and later joined the Patriots for training camp.

Coming out of the preseason, Martin was unable to make the Patriots’ 53-man roster, but was later added to their practice. Martin briefly returned to the Texans before the 49ers signed him to a future/ reserve contract in December of last year. Martin still has never taken a snap in an NFL game.