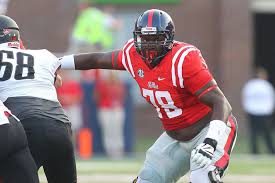 Charges against Laremy Tunsil have been dropped

About a month ago, Laremy Tunsil the Ole Miss starting offensive tackle and his step father were involved in a fight in which both were arrested.  Tunsil will luck out though, because the domestic violence charges against each other are expected to be formally dropped on Monday, according to a report from Riley Blevins of  The Clarion-Ledger.

Per the information in the report out of Oxford, Mississippi, lawyers for both have mutually agreed to have their clients sign a dismissal from earlier this week, thereby requesting to a local judge to review and drop the charges previously filed. Tunsil reportedly punched his stepfather in defense of his mother. Tunsil’s stepfather,Lindsey Miller, claimed tensions rose when an argument over Tunsil’s connection to sports agents flared up. The NCAA has since opened an investigation into Tunsil’s alleged connection to agents, according to CollegeFootballTalk.com