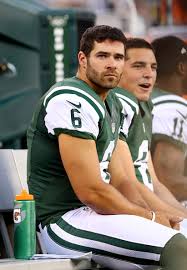 Today the New York Jets released punter Jake Schum according to Aaron Wilson of National Football Post.  He was signed as an undrafted free agent by the Cleveland Browns in 2013. He played college football at Buffalo.

Schum spent two seasons as at the University at Buffalo (2010–11), where he booted 119 career punts for 38.7 average, while landing 24 inside the 20-yard line. He transferred to Buffalo after spending one season (2007) at Buffalo State College.

Schum has been bouncing around since 2013: