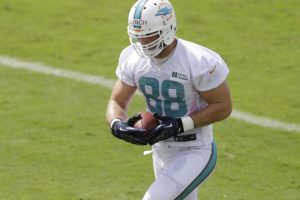 Jets have claimed tight end Arthur Lynch from the Dolphins

The New York Jets pulled a fast one today on one of their division foes.  The Jets claimed former Dolphins draft pick Arthur Lynch off the waiver wire.

Lynch, who fell behind undrafted Gerell Robinson and Jake Stoneburner on the depth chart as the third tight end, was a longshot to make the 53-man roster, and was released by the Dolphins yesterday.

Lynch, 25, was the Dolphins fifth round pick from last year and has another three years remaining on his four-year, $2.4 million rookie contract. He stands to make a base salary of $435,000 for the 2015 season.