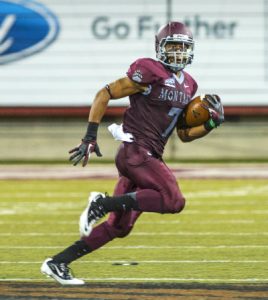 Montana’s WR Ellis Henderson looks like a sleeper wide out in the 2016 NFL Draft.

Yesterday, Montana upset North Dakota State University and Carson Wentz (the 6’5 quarterback expected to get tons of looks from the NFL).  The true winner of the game was Brady Gustafson and his two wide receivers Jamaal Jones and Ellis Henderson.

Brady Gustafson was 30 of 55 for 434 yards and three touchdowns in his first start for Montana. The 6-foot-7 junior completed passes of 15 yards to Jamaal Jones and 31 yards to Reese Carlson on the winning 15-play, 80-yard drive that started with 1:39 left.

The Grizzlies controlled the game and made the Bison defense look bad. Henderson had seven catches for 133 yards, Jones finished with eight receptions for 119 yards, and John Nguyen ran 19 times for 86 yards. The Grizzlies had 544 yards of offense.

Ellis Henderson is my sleeper wide receiver in this year’s draft and I feel he will be a draft pick. Jamaal Jones had a big game as well and there may be only one team that can compete with Montana and that will be Northern Iowa.  I think the secondary of Northern Iowa will bring a good competition for the Grizzlies, but until then it will be interesting to see.