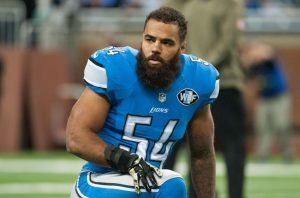 DeAndre Levy is not worried about anything but himself

Detroit Lions linebacker DeAndre Levy is due a huge pay raise, but he is still waiting on his contract. Levy talked to reporters who mentioned Lavonte David and Luke Kuechly contracts, but Levy says he is not worried about their contracts, he is worried about himself.

On Sunday, however, Levy said that he’s not paying that much attention to what his peers get in their contracts.

“I try to focus on what I can do and not have what I do dictated on whether another guy gets paid,” Levy said, via the Detroit Free Press. “I mean, [he and Lavonte David] both deserve it. … I didn’t know what he got but I just saw on TV that he got a deal and they’re both more than deserving.”