Khalil Mack should have a break-out year; I say 10 plus sacks 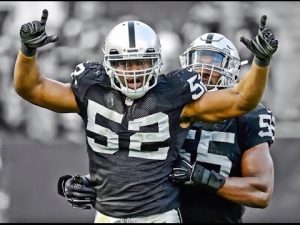 Last year Khalil Mack the Raiders first round pick was a stud at stopping the run, but he did not have many sacks. This year will be different, because the Raiders are sending him after the quarterback a lot.

“He’s pretty dog-gone good getting after the quarterback,” general manager Reggie McKenzie said before Monday’s practice. “He’s really good going forward, and it’s an opportunity to do a lot of different things with him. They’re going to use Khalil in all kinds of ways. That’s the way it should be.

“He’s a dominant defensive player, so you want to let him do what he does best. We’ll move him around and play him at different spots. That was the outlook for the defensive staff this off-season, was to put him in position to make plays.

Mack earned just four sacks in 2014, but compiled 52 quarterback pressures. The Raiders plan to increase those numbers by leaps and bounds in 2015. I am predicting 10 plus sacks in 2015, mark my words.