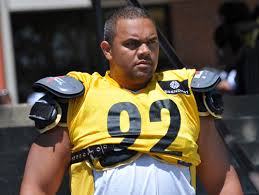 Hebron Fangupo has been signed by the Chiefs

The Kansas City Chiefs signed DT Hebron Fangupo and waived/injured RB Keshawn Hill. Fangupo returns to the Chiefs. He was a member of the team’s practice squad on two occasions in 2014, in September and November.

He has appeared in five NFL games in his career, one with Seahawks in 2012 and four with the Steelers in 2013. Hill was an undrafted rookie who rushed for 18 touchdowns last season at Sam Houston State.

Fangupo, 30, signed on with the Texans as an undrafted free agent out of BYU back in 2012. He too was released at the start of the 2012 regular season and since played for a number of NFL teams including the Seahawks, Steelers, Chiefs, and Redskins.