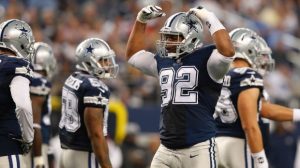 Jeremy Mincey has held out of Dallas Cowboys camp the last several days, and he wants a new contract, but today he showed up to camp, hoping the Cowboys come through and keep their end of the deal.

“We certainly won’t be talking to him about it while he’s not here,” said Cowboys executive vice president Stephen Jones.

Mincey was fined 30,000 dollars for failing to show up on Wednesday.  He was sending a message, but hopes to get paid more.  Currently Mincey is a very low paid player who has produced.

The news comes after a brief holdout to start training camp, as the veteran defensive end is seeking a pay bump on the final year of his two-year contract with the team.