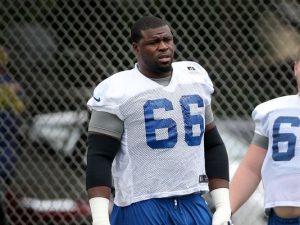 According to Mike Florio of Pro Football Talk, the Indianapolis Colts have parted ways with veteran offensive lineman Donald Thomas.

Per a source with knowledge of the situation, the Colts have released Thomas. He immediately becomes a free agent.

The 29-year-old Thomas, who signed with the Colts in 2013, has had a difficult time staying healthy during his time in Indianapolis.

Thomas played two games with the Colts in 2013, before being lost for the season with a torn biceps and a torn quad suffered in the same game. He then re-tore his quad early in training last year, missing the entire season.