Here is the entire Aldon Smith report including his Mugshot 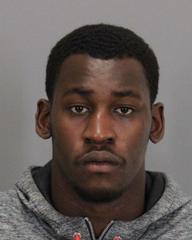 The report of Aldon Smith has been released to the public, and it includes his mugshot. There are some interesting things in the report.

Smith later returned to the area and officers dispatched to the scene found that he “displayed objective symptoms of being under the influence of an alcoholic beverage.” Smith took a field sobriety test before being arrested and transported to jail. The report states Smith gave a sample for alcohol screening, but the department’s policy is not to release the results.

On Thursday, August 6, 2015, at about 8:46 PM., Santa Clara Officers were dispatched to Moreland Way to investigate a disturbance involving a collision. On arrival, officers learned Aldon Smith was parking his vehicle and collided with a parked vehicle. After the collision, Smith exited his vehicle and caused additional damage to the parked vehicle with his car door.

Smith then left the area not reporting the collision or leaving his identifying information at the scene. He later returned to the parking area where he was contacted by officers. Smith displayed objective symptoms of being under the influence of an alcoholic beverage. Officers administered a field sobriety test to Smith.

Smith was then arrested for being under the influence of an alcoholic beverage (DUI), Hit&Run, and Vandalism. He was transported to Santa Clara Police Department for processing and later transported to the Santa Clara County Jail.

Smith did provide a PAS (preliminary alcohol screening device) sample, but the results cannot be released at this time as per our policy.

The investigation into this matter is ongoing. When completed, the case will be sent to the Santa Clara County District Attorney’s Office for review. If the District Attorney file charges, Smith is scheduled to be arraigned October 6, 2015