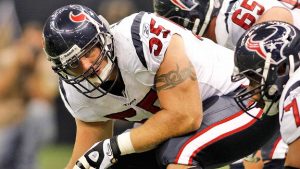 Chris Myers, the best center in Texans history, is hanging up his cleats after ten seasons in the NFL. Myers announced his decision on SportsRadio 610 this morning.

“When you know, you know” said Myers, adding that he received several offers to play for other teams this off-season, but just didn’t have the desire to play anymore.

Myers started his career in Denver, where he was a 6th round pick out of Miami in 2005. He spent the first two years on the bench before becoming the Broncos starting center in 2007. A restricted free agent in the 2008 offseason, Myers was involved in a sign-and-trade on March 17. The Broncos signed him to a four-year, $11 million contract with $3 million guaranteed and then traded him to the Houston Texans in exchange for a sixth-round pick in the 2008 NFL Draft. He is now considered to be one of the best centers in the league if not the best