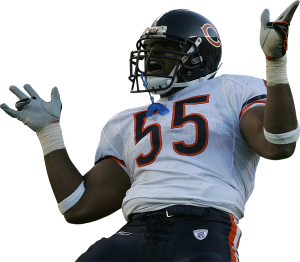 Lance Briggs is one of may favorite players of all time now. This morning the former Bears linebacker admitted to Andrew Siciliano that he wanted to punch a few quarterbacks in his career, and said Cutler was one. He was asked specifically if he ever wanted to hit Cutler his response was classic.

“There have been times, yeah, but there have been a lot of quarterbacks…” Briggs told Andrew Siciliano. “Why didn’t I do it? Out of respect.”

The former linebacker played 12 seasons with the Bears, including eight games last year before going on IR.  Briggs said there were other non-Cutler quarterbacks who frustrated him to the point of physical disgust: Craig Krenzel, Caleb Hanie, Rex Grossman, Kordell Stewart and Jonathan Quinn.

Briggs said the only two quarterbacks he did not want to punch was Brian Griese and Kyle Orton.