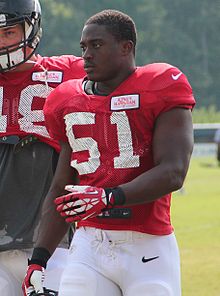 He was placed on injured reserve and Atlanta Falcons Team Physician Dr. Spero Karas performed reconstructive knee surgery last year. The surgery was filmed and shown on HBO series Hard Knocks as the opening segment on the 3rd episode of the 2014 season.

In a corresponding move the team signed WR John Harris. Harris originally signed on with the Philadelphia Eagles as an undrafted free agent out of Texas back in May. During his senior season, Harris caught 68 passes for 1,051 yards, and seven touchdowns.