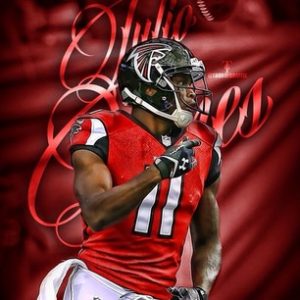 Atlanta Falcons and wide receiver Julio Jones were close to signing a new deal according to Falcons owner Arthur Blank, who stated Jones was closing in on a massive deal.

Blank: Julio is about to sign one of the biggest deals in the NFL with us and he doesn’t drive a Mercedes-Benz, so we’ll have to change that

Well that is not the case, according to ESPN’s Chris Mortensen, who is reporting that the contract talks between the Falcons and WR Julio Jones “stalled significantly” last week.

Even so, Mortensen adds that Falcons owner Arthur Blank remains optimistic that a deal with eventually get done.

According to Mortensen, there’ still no threat of Jones holding out for a new contract, and he’s content playing out the year under the fifth-year option.